Earlier this month our team, aptly named “the Rock Botherers” (who came up with that anyway?!), took part in the St Neots Dragon Boat Race in support of Magpas Air Ambulance. We didn’t win exactly but, to be fair, we did relatively well considering there were a lot of serious looking teams and the winner was a group representing a gym and the runners up were a squad from the RAF. We did come first in one heat, second in another and were pipped into third on our last one with only a few hundredths of a second between 1st and 3rd - which we think is an excellent result. Most importantly we beat Sue’s husband’s team in one particular heat!  ;-)

Special thanks to Tom, Sue and Sam each of whom showed off their drumming and shouting skills - something Sue certainly seemed to be a natural at. It was under her command that we beat the other teams in our winning heat by a clear half-boat length. Worth an extra mention was also Suz for being very enthusiastic and effective with her distinctive paddling style that apparently repeatedly blasted the person behind in the face with river water and simultaneously filled the boat up with water making it heavier as the race went on. But surely that just meant everyone was kept cooler in the hot weather..?

So well done to the whole team including Lee, Daxa, Sue, Suz, Christine, Shane, Marcus, Daryl, Sam, Giles, Will R and Tom. In addition, we had help from Amber, Naomi, and Robbie T who supplied additional muscle power and cake. Tom’s dog Stretch and Daxa’s dog Kashi were also on hand during the day to add their support. Thanks too to Robbie D for the loan of the gazebo which brought welcome shelter from the baking sun. 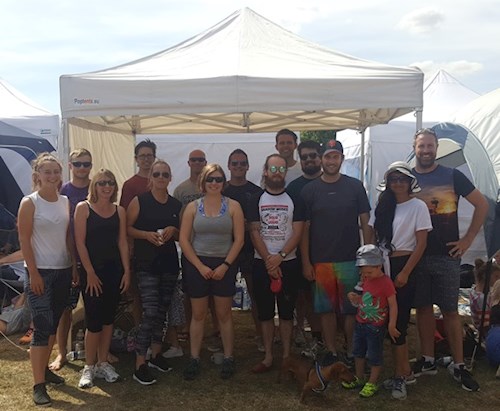